Palces in Knossos,Festus and Malia

From the first Cretan palaces in Knossos and Festus there are ony few ruins left of the palace built under the later, while palace in Malia,  that was built later, preserved the simple lines of the earlier period. Moreover in the Knossos and Festus there were princely palaces and great cities: Hagia Triada in plain Mesara and Kanji. We can say with certainty that this settlement is the first major example of the actual architectural art, and not just an ordinary building techniques.
If we look at first the ruins in Malia which are characteristic of the first palaces of Crete, ie which is generally called "middle-minoan period". Fortification wall was built of finely carved stone blocks and showing your progress sags and bulges,which can still be seen primarily in the western part of the wall. From medieval courtyard, surrounded by colonnades on two sides, of which one enters the different chambers that are spread in a square. In Malia from the early period  we can see the occurrence of structures with floors, especially over the western part of the palace, which were available via the large staircase in the middle courtyard, this is part of the palace that has certainly been changed in the future. The eastern part consists only of a simple single-storey warehouse, located between the courtyard and fence walls, that was made for bowls with the food supply. Hall which borders in the north with yard testifies the way of construction of the Egyptian influence on Crete. This hipostil (ie ceiling support columns) is here, though, made very clumsy, but this technique is later found in many shapes in Knossos.

Royal necropolis Krisolak has also discovered in Malia. Fence surrounding the palace, quite similar to the ones that surround huge tombs that show the same way of building as houses. Walls everywhere are made of lower quality building materials, but are always decorated with stucco. These architectural Gazette excavated in Malia showed that there were knowledge of metalworking already in middleminoan period. In workshop of bronze in the palace in Malia were found mold in which they poured various tools such as a two-edged axes, chisels and the similiar tools. In jewelry-making after that period is also noticeable improvement in the processing of metals. Some other pieces of jewelry have been spared from the devastation of the necropolis Krisolak. The stylized forms found indicates that people were more worried about the jewelry, but for the faithful representation. This proves that the Cretans knew very refined and very expressive and even the Syrian and Egyptian art of jewelry making. This love is characterized by the formation of the ceramics of the period. In Malia,there are generally a relatively simple geometric motifs and stylized plants and flowers in only three colors: red, white and black. It is a ceramic art of early minoan period that gave more primitive character.

If we cross to the study of so-called younger palace on Crete. ie, middle, or late minoan period that will take advances in ceramic technology. Villages in the vicinity of large palaces, especially in Knossos, show widespread use of fine ceramics. During the development of the highest authorities in the palaces it reaches a very high technical level: vases are becoming thinner and finally achieve the thickness of eggshell. The fact that the colors are preserved for millennia testifies to its full splendor of the high quality of materials used. Thus, an advanced technique leads to a large market and a high degree of specialization of artistic craftsmanship, in short to civilization at its peak. The transition from the old culture to newer corresponding to the development of the palace and the most important changes that were implemented continuously.
Posted by MMG at 7:54 AM 118 comments:

The cities and palaces 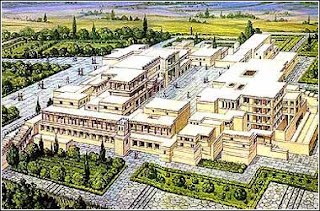 Homer numbered hundreds of Cretan cities. Undoubtedly, in this issue was also some market towns, Crete is a city symbolic embodiment of the new world that is both dedicated to the gods and despots. This applies particularly to Knos. Mosaic found under the ruins of his allows us insight into the draft of a fortified town with a multi-story houses lined side by side. Plan of the city is just as complex as the layout of the Cretan palace so it can establish clear-cut plan matches the city and palace. At the same time as the match occurs, a new form: the labyrinth. Labyrinth is definitely a myth that derives from the shape of the old Cretan cities of which are now remaining only a very vague signs and sketches - but we assume that the maze depicted in a symbolic manner and the scenic Cretan tradition of transport networks through the earth and sea.

The City Palace, the palace that developed the town. We can fully admire the Knosu, unique city, the monument construction in Knosu Palace, residence of the ruler Minoja, the largest and also most famous buildings in Crete. Thanks to the research many individual components were found that have enabled the reconstruction of the upper floors. The current layout of the palace makes visible and understandable only the last period of its use, ie the peak of the Minoan culture from 1600th to 1400th BC.
Posted by MMG at 12:59 AM 16 comments:

Crete and the so-called "Minoan period" are the starting point for the area from which they were derived (although quite different in content) polis, or city of citizens. This form,which  first created urban settlement of big format, should be put in touch with the other also a new phenomenon, namely a form of political power that was in the hands of just one man, Minoja despot, at once historical and mythical character who ruled Crete.
Both of these phenomena took the island from one civilization to another, from a civilization villages and marketplaces in the civilization of the palaces, symbol of the political, religious and economic power.This period, whose development phase flow with almost no transition can be interpreted only by influence of Egypt and Babylon dynastys.Teritorial expansion of Egypt on Asia and Babylon breakthrough in the Mediterranean area of Crete have enabled the sailors, merchants and travelers, not just to learn new techniques, but primarily to expand their use to the Cretan civilization as a whole.In Egypt, 2000. years before Christ already existed real palaces, the art of jewelry making, painting and the letter system.We can't precisly speak of a direct connection between Egypt and Crete, but the Phoenicians who have passed here have provided ample opportunity for contacts that were closer to the civilization of Crete need of improvement . It is most likely civilization was born in the east of Crete in middle minoan period. The palace in Malia was probably the first who ruled over the hitherto independent towns in the east and Malia made a kind of provincial capital. It appears that the Festus and Knossos, located in the center and south of the island, developed only later. At the beginning of the second millennium BC in these cities was a strong central government. Minoj ruler who relied on a strong bureaucratic apparatus has held important administrative function and had control over the metalworking and transport. The expression of that power was the construction of large palace, around which were formed urban settlements.

Crete by the end of the mycenae period - Antique Greece Crete is a Mediterranean island located southeast of the Peloponnese, and which sides act as the cut-off. They are dominated by three mountain ranges: Dhikti mountains to the east, which is not suitable for farming and its inhabitants live mainly from fishing, Idhi massif in the center of Levk on the west of the island. The only wider plain is Mesara in the south, the others likethat in Knos are very small. Moderately fertile soil of these plains were ideal for growing wheat, grapes and olives, while the mountainous land, partly covered with pine forest and cypress, were more suitable as a pasture for livestock or to obtain wood. Although the soil of Crete quality was not better than the other Aegean islands, is geographically accommodation helped to Crete soon occupy a privileged position. The island, situated halfway between Greece and Africa so that seafarers could easily came from their ports to the Nile delta, and also to Asia and the West, soon will be dedicated to commercial sailing. Cretans could easly sail along the Libyan coast or Cyprus which had rich metallic ores and even sail to the Syrian coast. Between the 1600th and 1400th BC Cretan fleet built of wood from their forests, was known all over the Aegean Sea and the island was an important force in the east and an ideal center for technical and economic ties that have emerged from the discovery of processing metal.

Peculiarity of Crete consists from the fact that it is first island in the Aegean that had civilization,and later it was centar of art yet unprecedented in any substantive technical or the spiritual and aesthetic areas. There will pre-helen art and civilization soon developed better than anywhere else.Geographical  importance factor in this part was understandeble, but it doesn't tell you the ethnological factor,which due to decoding of pre-helen language,makes it much harder to understand. It is even likely that the Aegean world very early on made a Mediterranean or Asian language, and especially the national community that was neither Semitic nor Indo-European, but whose lines of ethnic and language match certain tribes and languages of Asia Minor.
Posted by MMG at 7:14 AM 29 comments: