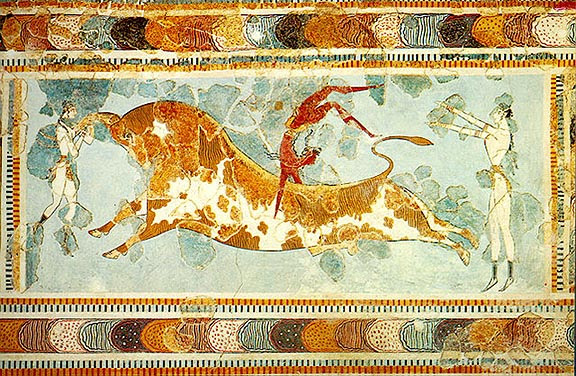 Crete and the so-called "Minoan period" are the starting point for the area from which they were derived (although quite different in content) polis, or city of citizens. This form,which  first created urban settlement of big format, should be put in touch with the other also a new phenomenon, namely a form of political power that was in the hands of just one man, Minoja despot, at once historical and mythical character who ruled Crete.
Both of these phenomena took the island from one civilization to another, from a civilization villages and marketplaces in the civilization of the palaces, symbol of the political, religious and economic power.This period, whose development phase flow with almost no transition can be interpreted only by influence of Egypt and Babylon dynastys.Teritorial expansion of Egypt on Asia and Babylon breakthrough in the Mediterranean area of Crete have enabled the sailors, merchants and travelers, not just to learn new techniques, but primarily to expand their use to the Cretan civilization as a whole.

In Egypt, 2000. years before Christ already existed real palaces, the art of jewelry making, painting and the letter system.We can't precisly speak of a direct connection between Egypt and Crete, but the Phoenicians who have passed here have provided ample opportunity for contacts that were closer to the civilization of Crete need of improvement . It is most likely civilization was born in the east of Crete in middle minoan period. The palace in Malia was probably the first who ruled over the hitherto independent towns in the east and Malia made a kind of provincial capital. It appears that the Festus and Knossos, located in the center and south of the island, developed only later. At the beginning of the second millennium BC in these cities was a strong central government. Minoj ruler who relied on a strong bureaucratic apparatus has held important administrative function and had control over the metalworking and transport. The expression of that power was the construction of large palace, around which were formed urban settlements.